Mercedes and Me… A Weekend Love Affair

If there is a downside to driving a lovely-looking, leather-lined, silver Mercedes E-Class Cabriolet for the weekend, it might be the need I felt to upgrade my house once I saw the car sitting out side it. Oh, that and the sense of sadness I felt when I handed the keys back to the delivery driver on Monday morning. 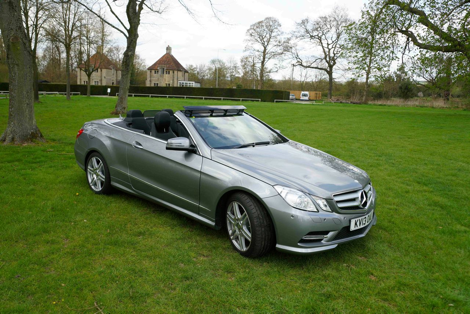 The sense of pampering started with that smartly-besuited delivery driver. Europcar offer a delivery and collection service, so I merely had to sit at home until he arrived with all the paperwork in hand. A few signatures and he was away – talk about painless car luxury hire.

Sadly, my partner for the weekend wasn’t there to see me being treated like a celebrity but she had her first taste of it when I picked her up at the station after work. As I swept up in the gleaming Merc, top still up at this point, a smile appeared that stayed on her face for the next two days. I do believe the deal was sealed when she sat down in her seat and the seat belt holder whirred quietly forward to present her with the belt. 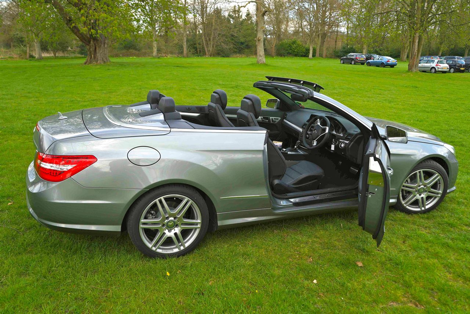 We headed off for our weekend in Kent via the M25 where the Merc held its place in the traffic at “motorway speeds” with a stately air. I am not sure what aura it gives off but it certainly seemed one that attracted much more respect than my usual ride. No one tailgated me, no one flashed me; it seemed that everyone knew it had lots more power in reserve. (The manual lists the top speed as 144mph) I have to say, I could feel the sense of privilege going to my head. None of them were to know that the engine was actually an economical two-litre diesel, not that the performance would give it away.

In the passenger seat, madame was enjoying playing with the stereo and electric seat. She discovered the adjustments to inflate and deflate the back and side rests and was soon lying back, wriggling her toes as if in a holiday deck chair, albeit a very comfortable, calfskin leather one. Imagine her shriek of delight when she then discovered the seat was heated. The room in the back for two is more than generous but this is really a car where two’s company – selfish enjoyment left no place for idle chit-chat with any backseat passengers. 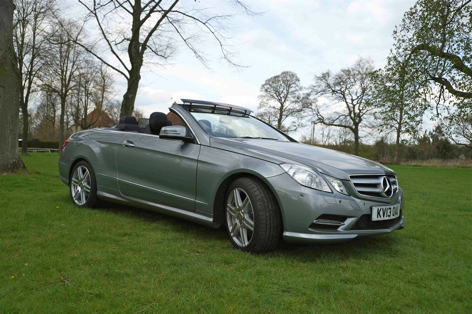 The cars gearbox has E-economy and S-Sport settings but, off the motorway, I switched to its third option – M-manual – and used the paddle controls to flick up and down through the gears as we made our way to our hotel through some quiet back roads. The Mercedes’ headlights turned night into day, following the bends ahead as the steering wheel turned, and the car effortlessly soaked up the bumps, a completely first-class experience that had us both smiling when we arrived at our destination. I don’t know if it was our cheerful faces or the smart car we arrived in but the hotel reception continued our premier experience. Even the tight hotel car park was made hassle free by the car’s inbuilt parking guidance, beeping merrily as I reversed into a tight space.

A late start the next morning gave enough time for the first sunshine of this summer to come out. A press of a button and the top whirred down to disappear into a neat recess. It was to remain down long into the day, as the clever warm air cushion kept necks warm and the cool evening air at bay. The aerodynamic wing above the windscreen also deflects incoming air high overhead, along with a lot of the noise that normally makes driving a open top car tiresome at high sped

At Leeds Castle, we were waved warmly into a parking space but it seemed a wrench to leave the comfort of our leather seats to tour the stately home. The luxury on show from an earlier age left me appreciating how much progress we have made – even the vast wealth invested in the comforts of royalty paled in comparison to our present day electronic and technical achievements.

The pampering was certainly having an effect and the weekend was starting to feel like a week away. Sunday was another glorious day spent exploring the Kent countryside, with a beautiful sunny afternoon at Kent Life farm. Madame managed to fall in love with the goats, so I do hope the seats in the Merc are not kidskin.

Well, all good things must end, as they say, and it was time to turn the wheel for London and home. Back on the M25, mercifully free of delays, I put on the cruise control, and settled back to enjoy the last few hours in our portable palace. Top down, stereo on, lit by the last rays of the setting sun, it was the perfect end to a perfect weekend.

Having worked for various newspapers in London for 15 years, and before that in Africa for close to a decade, Kieran Meeke has travelled to more than 80 countries. Realising he knew several other cities better than he knew London, this project was born.